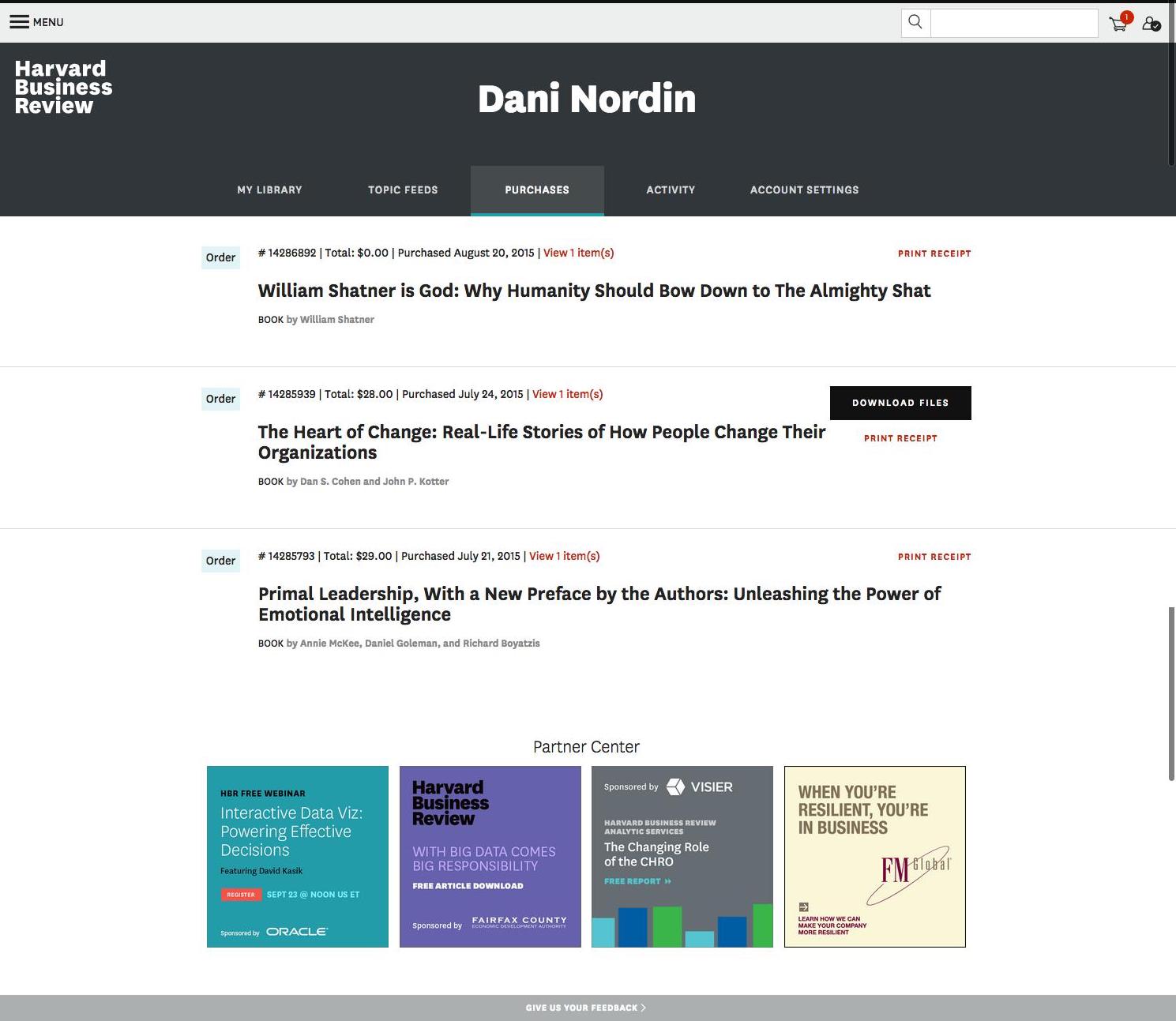 Over the course of 10 months, I helped the team find and prioritize multiple improvements to the e-commerce section of hbr.org, including a redesign of the customer's Purchases screen that reduced customer service calls by 46% in the first month post-launch.

The full project required a series of iterations on functionality and design, and several rounds of usability testing and expert reviews. I helped the Product and E-Commerce team identify and prioritize improvements, and collaborated with engineers and stakeholders to rearchitect several aspects of the experience, including user account features, the checkout workflow, and the account registration process.

When I first arrived at HBR in 2014, one of my first tasks was to investigate a JIRA ticket that read: "We are hearing from CS that customers are unclear how to access their downloads even when they get to My Activity section. We need to make the download links more prominent on the page." Ultimately, there were two key problems to solve: 1) Customer Service was getting over 200 calls a month related to finding digital downloads, and 2) Cart abandonment rates had increased by 50% since the redesign launched.

A cognitive walkthrough of the experience uncovered a range of usability issues, from inadequate messaging visibility to a user onboarding workflow that interrupted the checkout process. While certain changes, such as making the download button more visible on the confirmation screen, were quick wins, other changes were prioritized in the backlog and taken on in consecutive sprints. In the meantime, I continued to perform evaluative research, including multiple rounds of usability testing, and engage with the Customer Service group to find out the key problems customers were calling about.

The first major win came during a round of usability testing on the product search and purchase process. Over the course of 9 participants, each of whom were given a code to purchase a free product, 7 of 9 participants had to be reminded by the moderator to finish their purchase. The reason for this was a registration and onboarding workflow in the middle of the checkout process, which distracted them from their task. Removing this onboarding workflow for people who were completing the checkout process was the first step, and started to decrease abandonment rates.

The second major win came from testing on the user account features (referred to as My Library).  Several subsequent tests suggested that the means of getting to different sections of a screen (such as Purchase activity) were hidden within a dropdown which was invisible to users. Changing the dropdown to an interactive left navigation made the sections more visible, and increased engagement with the feature.

The final challenge was the purchase history itself. On the existing screen, purchases were grouped by invoice number, and the items within the purchases were not visible on the screen. This meant that users had to look up their invoice number to find a purchase, or click through multiple invoices in an effort to find the one invoice that had the download link for their purchase. I worked with the team to design an improved screen that prioritized the user's purchases, and negotiated with Engineering, E-commerce and Product to push the needed changes through.

In the first month post-launch, Customer Service calls related to digital downloads had decreased by 46%. By the following month, they had all but disappeared.